Who would have guessed that a comic featuring all of the sidekicks from the DC universe would take off in such a big way?


Yet ever since the 80s, the Teen Titans have continued to pull a major readership. In recent years, the team roster has changed a lot, but DC seemed to have settled on four major characters that are always on the team: Robin, Superboy, Kid Flash and Wondergirl.

Not surprisingly, the New 52’s Teen Titans takes a lot of cues from the now-cancelled Young Justice cartoon. This is a darker setting than those used to the Teen Titans cartoon of last decade are accustomed to. Yet, while Young Justice made their roster of teenage sidekicks take on a life of their own, Lobdell’s take on Teen Titans fails to take advantage of a great group dynamic and ultimately, this book comes across as little more than a poor-man’s Justice League.


It’s Our Right to Fight’s plot follows a very X-Men like structure. All over the world, teenage “meta-humans” are popping up and making themselves known. A shadowy organisation called N.O.W.H.E.R.E , which has possibly the most complicated acronym ever, are after all of them for shadowy reasons. Enter Tim Drake, a.k.a Red Robin, whose goal it is to gather all of the meta-teens he can to resist N.O.W.H.E.R.E and their ambiguous attacks. As Drake puts this team together, N.O.W.H.E.R.E releases their counter-measure to try and stop Drake and his new friends: the test-tube meta-teen Superboy.


I should make it very clear here, that only Red Robin ever admits to having been a superhero’s sidekick. The other characters have pretty much sprung up out of nowhere. And that’s fine. In fact, the team dynamic is strong in Teen Titans. As a group, they work together better than Geoff John’s Justice League did on their first outing. Most of the characters have strong, distinct personalities, as well. Kid Flash is cocky and arrogant, Skitter (cross between the Hulk and a weird bug creature), is militantly uninterested in joining a team, and Wondergirl is brash and headstrong. The only weakness in the characterisation here is Bunker, the gay Mexican who somehow manages to embody every cliché connected to both minorities. Go figure, the guy who wears and wields purple stuff is the gay character. Bunker also refers to himself as “fabulous” and dresses like a fashion designer. He uses Spanish interchangeably with English while seeming to assume everyone knows what he’s talking about, and regularly mentions how much his small Mexican village is nothing compared to American cities. Lobdell thankfully salvages the character by making him the glue that keeps the team together, but were it not for that, Bunker would be a step backward for comic diversity.


But Bunker isn’t the real problem for the Teen Titans. Lobdell’s written some excellent character here and they definitely have potential, but his poor choice of story content hurts what could otherwise be an amazing collection. Throughout this volume’s seven issues, it feels like very little actually happens. It’s a problem that isn’t made better by the book’s non-ending that leads right into The Culling crossover event, which left me feeling like I had given up on the series after reading a few issues. 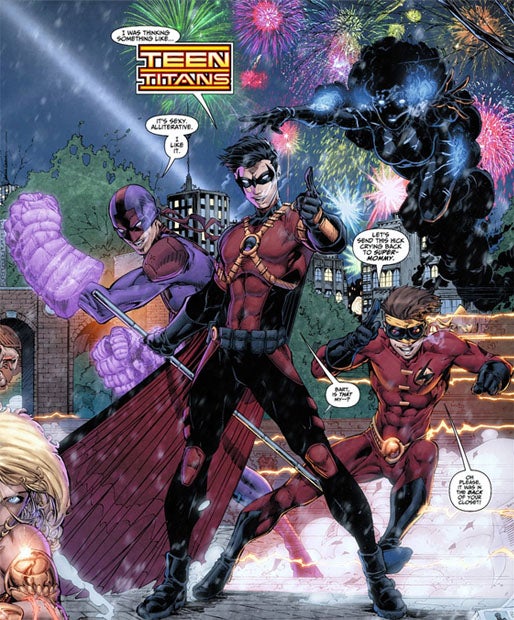 The art here is not bad by any means. Booth manages to capture the emotions of the Teen Titans perfectly and Rapmund’s inks are impressive. The problem, though, is that Teen Titans ends up looking like every other DC book on the market. Some really stand-out art with its own unique style might have served to compensate for a storyline that felt rather pointless. Unfortunately, even with really good sameness, the art in It’s Our Right to Fight failed to distract me from the fact that I just wanted the Teen Titans to take those great personalities and that amazing team dynamic and do something more interesting with it.


Ultimately, though, it’s about as hard to recommend It’s Our Right to Fight as it is to completely discredit it. Lobdell has made a great team here, but it’s a team who seems to be doing very little. This collection gets a two and a half out of five gay stereotypes.


- Bunker relies on too many stereotypes.


As much as many have loved to beat this story up, I still found myself enjoying it more than It’s Our Right to Fight.
Posted by T Vulture