In previous iterations of Captain America, the star-spangled avenger faced some pretty ground-level threats. Recently, though, the Marvel NOW! initiative has taken a swathe of Marvel heroes and put them in new, status-quo-altering situations. For Cap, this means his stories are about to get a lot wierder


Castaway in Dimension Z has all the elements of a book I thought I would hate; it’s Captain America, who never really grabs my attention if he isn’t on the Avengers, it’s a story about alternate dimension, which is usually too weird for me (I even found DC’s Earth 2 hard to swallow) and it skips forward in time by a decade at one point.

Okay, so in case the title doesn’t give it away, Captain America is trapped in an alternate dimension, caring for the stolen child of Arnim Zola, who I can only assume is an evil tellytubby (I’m not sure on the spelling, and that doesn’t bother me in the least) from mainland Europe. It sounds simple, but Castaway in Dimension Z  peppers it’s story with a tale form Steve Rogers’ rather terrible childhood, which adds plenty of extra complexity and character development.


Even more interesting, though, is seeing ol’ Cap become a father figure to Zola’s son, Ian. Ian’s a great character, and caring for him helps Captain America become a far more fleshed out character than he’s ever been before. As Steve protects Ian from all of the dangers of Dimension Z, writer Rick Remender somehow turns the WWII hero into an even better soldier, more hardened than previous versions of the character. It’s great to read and it actually makes me care about the super-soldier more than I did before. That’s not saying much, I realise, but I’m actually starting to like the guy now.


The book’s villain may look ridiculous, but both he and his daughter/sidekick feel very fleshed out in this volume. Zola’s hatred for Captain America evolves over time. He moves from simply hating the first avenger for opposing him, to believing that Steve killed his son to believing that Steve kidnapped his son out of some sick desire to torment him. It’s nice to see heroes progress and develop, but villain development is infinitely more satisfying. Zola’s Daughter Jet, also feels oddly fleshed out, considering she only makes major appearances in the last two issues.


My only problem with this story, is that the support characters, bar Ian, are bland beyond belief. I felt no remorse when they died, because the characters didn’t beg sympathy. Thankfully, the cast of supporting characters is kept to a minimum though, so they don’t exactly get in the way of things. 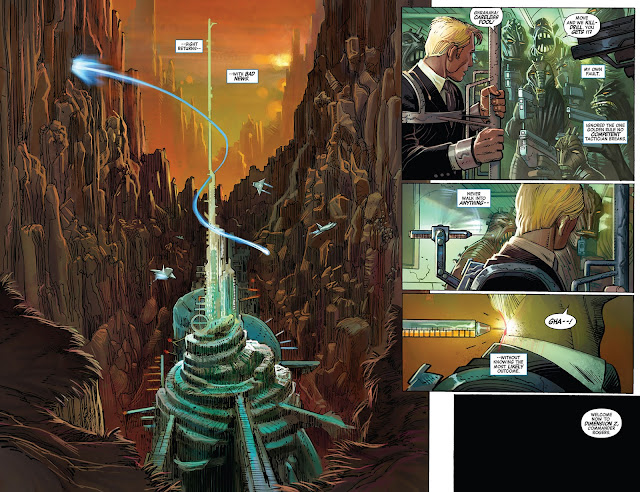 John Romita Jr’s art suits this weird new world like a glove. Harsh lines and exaggerated shapes abound here along with bold dark colours to make this whole world look strange and forboding. The book is littered with strange creatures as well as unfamiliar, alien landscapes. In short, you know you’re not in 616 anymore (note: 616 is the main Marvel universe). Usually, that would be a turnoff for me- you can only get so weird- but here it got me hooked. Each page feels like an act in exploration and it makes me wonder why I didn’t pick this book up sooner.


Castaway in Dimension Z Book 1 is a beautifully crafted book that takes a 90-year-old character and somehow keeps him feeling fresh. It gets a four and a half out of five evil telletubbies (seriously, how do you spell that?).


Somehow Captain America is in the 616 universe as all of this unfolds. Heh, beats me.
Posted by T Vulture