One of the biggest elements that Geoff Johns has added to the Green Lantern mythos is the existence of lanterns of all the colours of the rainbow. All of these colours have different emotional attachments. Green Lanterns harness the light of Will. The Sinestro Corps use the yellow light of fear. Rage is the source of the Red Lanterns’ abilities. Blue Lanterns get their power from Hope. Agent Orange, wields the light of Avarice. The Star Sapphires fight with the violet light of Love (point- sapphires are blue, not violet). And the Indigo Tribe’s owe their abilities to Compassion. These different groups don’t typically play nice together.


Why am I mentioning Geoff Johns in a review of a Tony Beddard book? You’ll see.


So New Guardians tells the story of the fourth Earth lantern, Kyle Rayner. Kyle is an artist, which makes him pretty well suited to a power that utilises his imagination. Unlike the other Green Lanterns, however, Kyle has actually felt a range of emotions outside of will. In the old DC universe, Kyle felt fear when he found his girlfriend dismembered and left in his fridge. He felt love multiple times as the Green Lantern Corps’ resident player (he’s had multiple girlfriends over time). 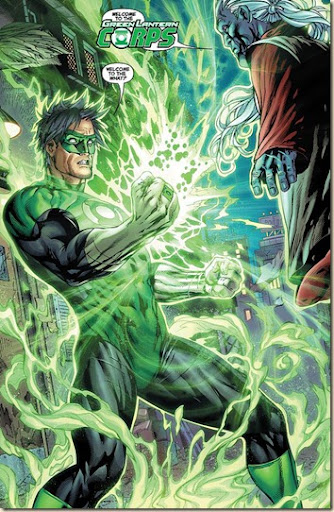 While nothing’s specifically mentioned about these emotions in The Ring Bearer, that may be part of the reason that rings from every lantern group in the universe suddenly pick him as their bearer. This has the dual effect of irritating the Guardians, the official bosses of the Green Lantern Corps, and irritating every single other Lantern out there. So Kyle finds himself on the bad side of the Red Lanterns, Sinestro Corps, Indigo Tribesmen and Star Sapphire, who each send their own representative to take out Kyle and retrieve the rings. The only one who is really on Kyle’s side is the Blue Lantern Saint Walker, but he’s still after his corps’ lost ring.


Somehow, this all results in a grudging team-up between these multi-coloured lanterns. Grudging team-ups have happened before; take Geoff Johns’ Justice League for example. The difference here, though, is that it works better than Johns’ attempts did. These New Guardians have a genuine reason for not liking each other- their emotional spectrums are so at odds with each other. The Sinestro Corps Arkillo, for example, distrusts Saint Walker because hope is naturally at odd with fear. Where Beddard succeeds, however, is finding meaningful ways for the characters to grow and reconcile their differences. It’s a great way for the characters to truly grow and New Guardians feels a better book because of it.


My only real complaint with the story here is that it feels less connected to the other two Green Lantern books than Green Lantern or Green Lantern Corps. In these books, it becomes clear that the Guardians are up to something no good, and that becomes the real thrust of the two titles. In The Ring Bearers, the corruption of the Guardians is hinted at, but never really utilised.


That said, the story is still fun to read. The New Guardians travel to exotic locations and meet and fight a variety of alien life. There’s an underlying conspiracy here, even if it seems less drastic than the one in the other two Green Lantern books. And yes, there’s plenty of great, ring-slinging action. Being an artist, Kyle’s projections tend to be more interesting than most, and Beddard takes full advantage of this. Early on, Kyle saves a falling crane by using constructs shaped as giant construction workers. It constructs like these that really help New Guardians to stand out against other Lantern books.

Art here is distinctive from other Lantern books, but not really distinctive from other New 52 titles. That sounds confusing, but let me explain. In Green Lantern, Green Lantern Corps and Red Lanterns most of the colours tend to be limited to shades of red or green. That’s fine, but eventually it becomes a bit monotonous. We're still, though, getting a lot of Jim Lee-esque work here. New Guardians stands out because its story allows the for a wider colour palette, and it looks bright, fun and just plain wonderous. My one problem with the art is the handling of Star Sapphire Fatality. Granted, she shows less skin than other Star Sapphires, but artist Tyler Kirkham crops her head out of at least two panels, allowing the reader to see only her breasts. At one point, you’ll even find yourself thinking “Um, why is her cleavage talking? Oh, because we can’t see her head!”


The Ring Bearers is a great utilisation of Kyle’s character as a vehicle for storytelling, but it’s a shame that it doesn’t really connect to the other two Green Lantern books as well as it could have. It gets a three and a half out of five talking cleavages.


+ Action is genuinely fun to read


- Doesn’t connect as well to other Green Lantern titles


- Fatality’s is too sexualised.


No Lantern book feels as significant to the franchise mythos than Geoff Johns’ work in the new 52- definitely worth your time.
Posted by T Vulture