Pointing out Pixel F***ery: Why it's okay to blame Marvel for what Marvel is doing wrong.

So the internet did the totally normal and not Stockholm-Syndrome-y thing this week when Vulture published this article last month describing the poor treatment of VFX artists by Marvel studios. Written by an anonymous contributor, the writer remarks that:

The response from most have been appropriate: they have called it a terrible working environment and have called on Marvel Studios to change.

Then... there are the others. 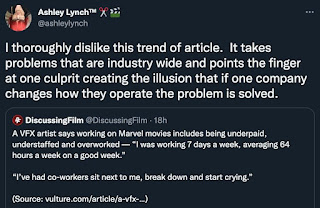 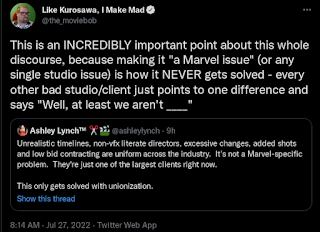 And look, dear thought leaders of film twitter, you're probably right. This, in broad terms probably is a much bigger, industry-wide problem. But let's not treat this like the good faith argument that it poses itself as. Yeah, it's totally okay, even right, to point the finger at Marvel here.

Let's start with the claim that this is an industry-wide thing and not just a Marvel thing: it's true, but it's true in the same way that Anti-Semitism not just being a Nazi thing is true. A problem being widespread does not mean that the most egregious offenders are suddenly not something we need to worry about (I also suspect that were this not Marvel Studios, the problem would suddenly limit in scope to these people, but that's pure speculation).

And make no mistake: Marvel is at least presented as the most egregious offender here. The writer in the article remarks that: "Where I would usually have a team of ten VFX artists on a non-Marvel movie, on one Marvel movie, I got two including myself. So every person is doing more work than they need to." They further state in their conclusion that "Not every client has the bullying power of Marvel".

And this isn't necessarily because Kevin Feige is sitting in his industrial revolution-style movie factory, beating the children who don't make the machines work and rubbing his fingerless-gloved hands in glee whenever the working class is oppressed. The writer cites the way that Marvel puts out heaps of movies with inflexible release dates and hires directors with little to no experience with effects-driven filmmaking as key components of why working with Marvel is so hard, but these are things that are VERY specific to the way Marvel does things. I'm not saying Marvel is the only one to put undue stress on the way that VFX artists do their job, but they certainly seem to be the worst at it. And why should we not focus on the ones who are doing the most damage? If I have a grazed knee and a bullet wound at the same time, I would want the bullet wound taken care of first because it would be causing the most pain. Why should Marvel not change when they are the ones with the most bullying power?

But a bigger problem here isn't that Marvel are doing the most damage- it's that they've been so successful in the process. No less than ten Marvel movies have earned over one billion dollars. Their model for filmmaking and storytelling has been one that every other studio has tried to ape over the last decade. They have been praised as industry leaders. It's safe to say that no other studio has as much influence over the industry as Marvel has- or it's at least safe to assume so.

And this is how they got that influence?

I know what some will say- that they actually got that influence from telling good stories with compelling characters- but none of those stories would be possible without the work of talented VFX artists who make Iron Man fly, Captain America's shield ricochet off of mooks and Thor's hammer crackle with lighting. Hell, they've even made hotel rooms for movies like Spider-Man: Far From Home. For a key part of Marvel's success to be thanks to these kind of working conditions sets a disturbing precedent. It says to other studios that this is what you need to do to play with the big boys, and we can't just assume that other studios won't follow that example. I called Marvel and industry leader, maybe it's time they showed some real leadership.

And this isn't some argument against VFX artists unionising, by the way. Rather, I hope that when they do unionise, they aren't afraid to take industry giants like Marvel to task. I don't really have a snappy way to end this post, except to say that when things are wrong, they are wrong- even when they're your favourites.