Falcon and the Winter Soldier- Review so far 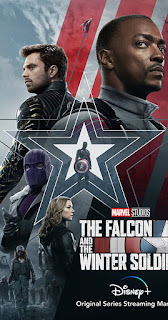 Earlier this year, Disney+ gave us a new addition to the MCU in the form of Wandavision- a show that, despite the awful title, did something truly new with the franchise and its characters for the first time since 2012's Avengers. It was stylish, it presented an intriguing mystery and seemed to be made for fans of classic television sitcoms and serialised mysteries such as Twin Peaks.

Falcon and the Winter Soldier, by contrast seems to be made for people who retweet "Endgame says hi" every time you dare to praise another movie.

That isn't necessarily a knock. The new Marvel series makes good use of the streaming show format and maintains a good pace, but unlike it predecessor, Falcon and the Winter Soldier offers little more than "MORR MAHVEL". And at the end of the day, if "MORR MAHVEL" is what you want, this show provides in spades. Just don't expect to recommend it to anyone who isn't already in the admittedly large pool of "current MCU fan".

In a post-Endgame MCU, Sam Wilson (The Falcon, played by Anthony Mackie) has decided that, despite being given the Shield of Captain America, the mantle of the iconic hero is one that he shouldn't bear. He leaves it to the American government while joining Bucky Barnes (The Winter Soldier played by Sebastian Stan) on the hunt of a group called the Flag Smashers- renegade soldiers who seek to return the earth to the way it was before... are we really calling it the blip? I was so ready to ignore that when Far From Home tried to make it a thing.

During this time, though, the American government have called a new Captain America by the name of John Walker complete with black sidekick just like Steve had. This new Cap has all the good intentions of the original, but his methods seem... less pure. Sam and Bucky find themselves having to deal the Flag Smasher while stopping this new Cap from going completely ballistic.

Like I said earlier, this new series takes full advantage of the longer runtime a show of this kind offers. There's more room for plot and characters to develop to the point where these characters actually feel more engaging here than they ever did in any of the movies. we get glimpses into the normal life of these characters and end up having plenty of time to feel for them. But what really struck me was how little the writers and actors here depended on previous movies to do the job of characterisation. It really feels like you're experiencing these characters for the first time despite their appearance in four movies prior to this (I'm not counting Sam's appearance in Age of Ultron because would you?). In no character is this more clear than Daniel Bruhl's Baron Zemo, who was little more than an annoying diversion in Captaim America: Civil War, but here is an engaging player in the whole drama and seems to have even more control over the situation than any character could realise. This could be a point in the show's favour for doing so much with these characters or a point against the movies for doing so little. Personally, I see it as both.

Action here is also well done. The geography of each fight is clear and the character designs are distinctive enough that you're never lost as to what is happening, and the kinetic energy of each fight scene is palpable enough to make each one feel brilliantly punchy even if, as one character acknowledges in the first four episodes, there's a bit too much of a reliance of knives for bad guys.

That said, it seems like a bit of an injustice that this show follows after Wandavision. As good as Falcon and the Winter Soldier is, Wandavision's creativity and craziness might just have set expectations a little too high. Not everything can break the tried and true MCU formula, and perhaps it was unfair to expect Falcon and the Winter Soldier to do anything more than hold the line, but it's slightly disappointing that after Wandavision, all we end up getting is what is essentially a really long, segmented MCU movie. This is true right down to the visual style, which started out using light and shadow really interestingly, but by episode four (the most recently released at time of writing), we're back to Russo-style "All-the-colours-are-there-so-none-really-stand-out" blandness.

I've seen some, (Moviebob in particular), praise the show for using racial politics so much, particularly in Sam's part of the story. I'm not really sure I can praise them. Sure, the politics are there: Sam finds it hard to get a loan, is pulled over by cops for no good reason and finds out that one black veteran (Isiah Bradley played excellently by Carl Lumby) was a victim of experiments to re-create the super soldier in a way that reflects real-life experiments performed on African Americans, but at the end of the day, it feels like the racial politics and the story are acting independently of each other. If you took all the racial politics out of Falcon and the Winter Soldier, the show's plot would go almost unchanged. It's not like Marvel aren't skilled at mixing politics and engaging stories- both Black Panther and Netflix's Luke Cage did this excellently- but you have to ask why the racial politics, if they felt the need to include them here, couldn't have been woven in more seamlessly. Because of this, the politics feel easy to ignore and it feels wrong as a result.

That said, there's nothing in this show that should deter the MCU-Faithful. I wish we got a show that better integrated its admirable politics and tried to break the MCU formula just a little, but what we have here is solidly entertaining nonetheless. I'm intrigued as to what Disney+ has to show us going forward.