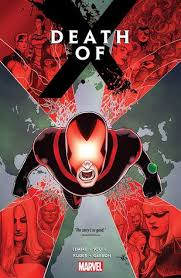 You know, for a company awash with "SJW" politics, they certainly like to let their non-mutant heroes beat up their minority metaphors. The Jew- I mean, X-Men- have had their numbers whittled down to two hundred in House of M and all the Avengers did was accept it as the natural order of things. Then they got punched in the face by the Avengers in Avengers vs X-Men because if Captain America didn't attack those uppity black peo- I mean, X-Men- they'd probably keep evilly disarming nuclear weapons and cruelly bringing water to drought-stricken areas (seriously, that's what they do in the book). At this point in my reading, I'm about to enter the Inhumans vs X-Men event where you can pretty much count on the Inhumans beating up the LGB- I mean, X-Men. At this point, you can colour me surprised if we don't get a Power Pack vs X-Men event where the team made up entirely of kid-appeal characters get to beat up the Musli- GAH; X-men! 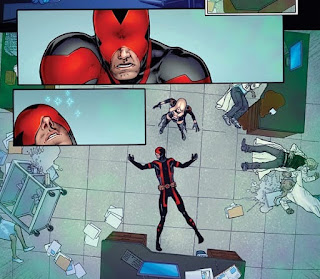 In case I was being too subtle, let me make something very clear: I do not want Inhumans vs X-Men to be a real comic in the mainline continuity. Partially because I'm sick of the Mexic- wait; X-Men-being kicked around so easily when they're some of the most objectively powerful people in the Marvel universe, but mostly because I know this is isn't an event that comes naturally from good story writing. It's about promoting a team that Marvel studios can use in movies over a team they can't. Just like how Marvel cancelled the Fantastic Four because every time Kevin Feige saw it's poster on the wall, he'd start crying and listening to Good Charlotte.

That said, if this is how we have to have this event, I'm glad Death of X is the way we end up with it. It is, (and it's been a long time since I've said this about a recent Marvel book) a decent mini-series. The whole thing deals with the death of adult Cyclops (because we need to distinguish between him and young Cyclops these days). Basically, Cyclops is taking a group of Asia-- no; X-men- to Muir Island where his fellow mutants have been investigating the Terrigen clouds that have been giving Inhumans their powers and Mutants cancer. When they get there, they discover that ever non-MCU character still active in the 616 is now dead and the Terrigen cloud is to blame.

Somehow this all leads to writers Jeff Lemire and Charles Soule trying to convince you that Cyclops was the baddie in all this. See, we're lead to believe that Cyclops wants to destroy the cloud because he doesn't want other mutants  to die whereas the Inhumans want to keep the cloud because they think it's really super special. Juxtaposed against each other like this, it seems like Cyclops has the slightly nobler goal here. Sure the Inhumans see the cloud as sacred, but that seems pretty insignificant that the cloud will LITERALLY POISON ALL MUTANTS! I fail to see why I shouldn't like cheer for the Inhumans, Marvel, and their TV series isn't helping anything!

This could have been fixed by making the Inhumans seem to be some sort of underdog, but Lemire and Soule don't even seem to do that. In the first issue of the miniseries, the Inhumans, lead by Crystal, are talking about how hard it was for humans to accept them, but through diligence and hard work, the humans now cheer whenever they come to their town. On the other hand, the mutants have been hated and feared since the sixties and what kind of message are we trying to send there? See, minorities? If you just tried a bit harder you wouldn't be so oppressed all the time!

As writers, I really like Lemire and Soule so I'll give credit where credit is due. The action here is well-paced. Both writers do a great job of giving us these great moments where the characters use their powers incredibly well. There's also a plot twist at the end of this which is fantastic; partially because you don't see it coming, but mostly because for a good portion of the book, you think that one of the characters is just being written poorly. Then you find and why and I won't spoil it but it is pretty incredible. Despite everything I've just whined about, these elements do make up for them and it leads me to believe that a lot of the problems aren't the fault of the writers as much as they are of Marvel execs trying their best to get people to stop being fans of the Native Ameri- ... you know how this bit works by now. 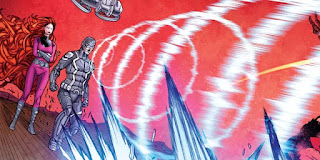 The art is handled by Aaron Kuder an Javier Garron and it's does it's job. Both artists excel in action scenes and with the support of the colourists, it's these pages in particular that really stand out. It's when you get into calmer moments where character are allowed to show more emotion that it really becomes clear that Garron is the better artists. He's got a talent for making characters emote in ways that are emotionally relatable. Kuder, on the other hand, does something with his characters' eyes that make them look like someone has hit them on the head with a club made of concrete and hallucinogens before letting them speak. Their mouths are in the right positions, but as I was reading I kept having the sneaking suspicion I was about to join a hive mind.

Overall I liked Death of X. At the end of the day, though, it's hard to tell exactly what it is. It's either a last meal for fans before the Inhuman's bullet is put through their skull or it's bait to make us think the Indians- yes, you're getting good at predicting this now- stand a chance in the upcoming event. It gets a three out of five DCEU fans...
...
GAH! X-MEN!