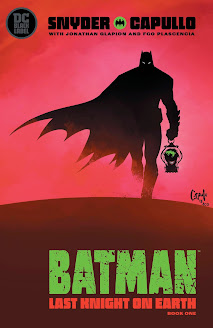 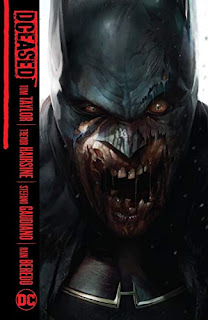 Batman: The Last Knight on Earth

Well, DC Fandome finished last week. We got teasers/trailers for The Suicide Squad and The Batman. Just on the side, is this what DC intend to do with their properties? Put "the" at the start of the title and hope people forget what came before? I'm surprised at this stage they aren't calling it The Wonder Woman 84, the trailer for which was good, but not surprising. We got Gotham Knights- better known as The Batfamily can't have anything for themselves without neckbeards throwing a tantrum. Oh- there was also that Suicide Squad video game trailer- the squad seems to be taking on Superman again, because that seems to be how DC promotes characters; forget writing engaging stories, just have them fight Superman and-- wait a minute: Why are all these characters carrying guns. I get Harley Quinn and Deadshot carrying them, but King Shark? If I play as King Shark, I want to tear mooks apart with my mighty jaws, not wave a target over them and hold down R2. And why does Captain Boomerang have a gun? Can we notice no other long-range weapon that he might use? One that's his name for example?

You know what was conspicuously absent? Announcements about DC's comic line. The Milestone Universe is coming back, but that's outside the mainline DC imprint. On the back of constant layoffs, one can't help but think that DC stands about as much chance as American schoolchild on a weekday. With that in mind, let's review a couple of books that, appropriately are about the end of the DC universe. Let's call it The AT&T Double Bill.

First up, DCeased. This story falls in the "zombie apocalypse" school of the end of the world and to be fair, writer Tom Taylor does an admirable job working this into the DC universe. The thing that turns people into zombies is a corrupted version of the Anti-Life Equation, and it's even carried to Earth by Cyborg. My problem though is that I'm well and truly uninterested in zombies. I don't care for hordes of brainless creatures desperate to feed- I teach middle schoolers and such things always feel too much like my job. So I started reading ready to be bored to death, but by late that same night, I was still reading, which is like a vegan discovering their favourite sandwich had ham in it. So what was it, then?

Well, firstly, the story doesn't bother with the whole "humans are the real monster" schtick, and instead sticks to saying that "actually, the real monsters are the ones mistaking your face for a violet crumble". It's nice to see a zombie story not pretend it's commenting on any moral complexity. It leaves the story to focus on the tragedy of loss. Characters have to kill their best friends, they lose their parents, they grapple with the constant realisation that they're just not going to win. It's an oddly refreshing tragedy, one that avoids one of the commen pitfalls of this kind of story. Right from the get-go, it's clear that things are completely... can we say "American-2016-election'ed"? When we know that this is going to end badly, we therefore don't end up with our hopes dashed when that's exactly what happens. Rather, what little hope remains in the story ends up all the more sweet, and that's exactly what DCeased does, so it gets four out of five violet crumble faces. 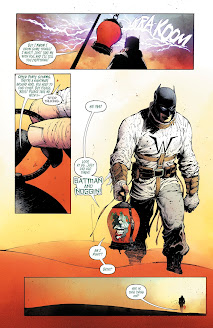 And since there's really no way to segway into this, let's move on to Batman: Last Knight on Earth. This is a slightly more complex story that DCeased: A cloned Batman wakes up to find that the entire world has gone to hell... actually it's not that much more complex, really. This is a Scott Snyder book, so expect a lot of Scott Snyder tropes to make an appearance here. There's an evil version of Batman, a new take on a fight with Superman, and Joker's here. Actually, it's just Joker's head, but Snyder's voice for him this time around is so different to his previous work, that it actually makes him the best person in the book. I haven't been made to laugh by the Joker for a long time, but here I was, chuckling every time he asked if he could be Robin, or making some pun about whatever danger Batman found himself in. Then I remembered that I'm not supposed to enjoy the Joker, because that makes me an incel or something- NO, I'M NOT EXPLAINING THAT!

Of course, the other thing that seems to happen in Scott Snyder books is that the setting becomes a character of it's own. In Batman, it was Gotham, in Dark Nights: Metal, it was the dark multiverse and here, it's the whole damn world. Snyder makes full use of this setting, letting us explore not every inch of it, but enough that it can be enjoyed. I'm reminded of Old Man Logan in many ways, and that's not really a bad thing. Both books employed a "What if we did Mad Max, but used our most popular heroes with the pointiest ears" approach, and the results have been just distinct enough to make me want to see more of it. It's been heaps of fun and, like the book before, also earns four out of five Joker incels.

What? That's not good enough? Fine. I suppose I'd better declare a winner in this double-bill. At the end of the day, I think I have to give it to Last Knight on Earth- if for no other reason than that it manages to give us all the suspense of an end of the world story without resorting to that thing that every bit of pop culture seems to be going to, but if you want one that better represents the state of DC, best go DCeased. A plague brought on the world by means of social media? Sounds like the Snyder Cut to me! Gfaw Gfaw!