Background information:
It’s Geoff Johns week! In short; I have a lot of Geoff Johns books to review and we're getting them out of way right now!


Geoff Johns has been writing Green Lantern for nine years, so there is a LOT of backstory to the New 52’s reboot. In short, A group of blue aliens known as the Guardians commissioned the Green Lantern Corps as guardians of the universe- think Jedi with spandex. Each Green Lantern is given a power ring which can create constructs out of green light- light that is fuelled by willpower. Each Green Lantern is also given a lantern-like battery with which they can recharge their rings. As long as a Green Lantern’s ring is charged and their willpower strong enough, they are almost unstoppable.


Hal Jordan is one such Green Lantern, granted a power ring by dying Green Lantern, Abin Sur, Hal has spent a large part of his career fighting Sinestro- the DC equivalent of Darth Vader. Sinestro wielded yellow light- light powered by fear. As such, his constructs were more powerful than Hal’s.


But all of that changed when a Green Lantern ring picked Sinestro as its new wielder. What’s more, Hal has been expelled from the Corps, leading to an interesting situation.


Geoff Johns has basically made Green Lantern the amazing franchise it is today. His nine-year storyline has remained pretty much untouched in the New 52 reboot, and as such there’s a lot of backstory that new readers may find difficult to understand. But if you’re new, and willing to accept that there are some things you don’t know, Sinestro is a rewarding read.

So Sinestro is now a Green Lantern. What’s more, the Guardians have given him licence to do pretty much whatever he wants (so long as he protects his sector). In this book, that means freeing his home planet of Korugar. To do that, he creates a ring to give to Hal Jordan. As a result, Hal now answers to Sinestro.


What follows is an interesting status quo. Hal does not trust Sinestro in the least, but he wants to be a Green Lantern again so badly. Hal is forced to work with the one person/alien/thing (whatever Sinestro is, he looks like a pink Hitler) he wants dead more than anything else. There’s some great tension between these characters who you can tell would be more than happy to fight each other, but necessity dictates otherwise.


It should come as no surprise that Sinestro is the central character to the collection and John’s does everything right with him; he’s fully fleshed-out and has some clear motives to his actions. As you would expect, he doesn’t trust the Guardians in the least (which is good, because it turns out you actually can’t trust the Guardians at all), and is working to uncover them while he tries to save his home. Sinestro also has to confront his past as a fear-mongering past as his own planet hates him for creating his own twisted version of the Green Lantern Corps who are pretty set on enslaving Korugar and killing its people. I don’t know if I ever appreciated any comic villain as much as I have Sinestro (and no, I didn’t conveniently forget the Joker). Sure, Sinestro’s trying to do the right thing; but at no point was I ever convinced he was the good guy- it’s this mistrust that Johns creates that draws you even more into Sinestro’s personality. 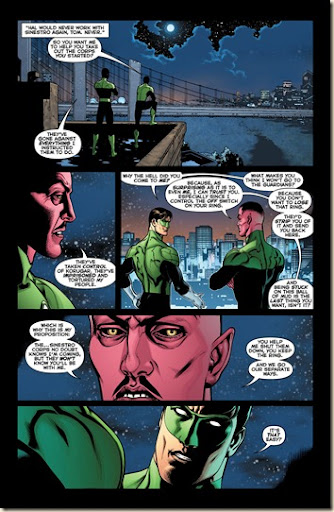 Hal isn’t ignored in this book, though. His character works really well as an outlet for the reader’s thoughts. I didn’t trust Sinestro as I was reading; neither does Hal. I was frustrated that Hal wasn’t a Lantern; so was Hal. I was convinced that Sinestro was still evil despite the fact that he saves a whole planet; so is Hal. Johns makes sure that Hal maintains the human element of the Green Lantern status quo by making him as imperfect as the reader. This isn’t Superman- Hal’s not a mature guy. This also isn’t Batman; Hal isn’t anywhere near as smart. Hal, instead stands out really well on his own.


The art by Doug Mahnke is quite good. Mahnke has the great challenge of drawing various alien species. It would have been so easy to draw misfigured, or recoloured humans and call it a day, but Mahnke goes further than that. Each alien has its own body type. Tentacles, insectoid legs and faces with nothing but teeth abound throughout Sinestro and it’s a joy to look at. Unfortunately, there’s very little to distinguish this art from other New 52 books like Justice League, Nightwing or Aquaman. As such, it’s hard to praise this art as particularly spectacular, but it performs its function and performs it well.


Sinestro is every a Johns Green Lantern collection should be. It gets a four out of five pink Hitlers.


+ Sinestro and Hal’s characters are well fleshed out


+ Character designs are weird and wonderful


The New 52’s Green Lantern books are all interconnected really well. As such, it would be a crime if you didn’t read this one too.
Posted by T Vulture