Artists: Yanick Pquette and Marco Rudy
Collects: Swamp Thing #1-7
Background Information:
The second in Scott Snyder week!
I’ll admit, for too long I had dismissed Swamp Thing as a book that was “too weird” for my tastes.  And yeah, it’s pretty weird- Swamp Thing is listed under the “horror” subsection of DC’s New 52, along with Animal Man and Justice League Dark. But don’t dismiss it- Swamp Thing is every bit the superhero that Superman or Batman are.
Alec Holland was a brilliant biochemist until a lab experiment killed him. Post-death, Holland was found by an entity known as the Parliament of Trees and chosen to become the Swamp Thing. Swamp Thing is the avatar of the Green- the life force that controls plants. As such, Swamp Thing can also control all plant life- creating anything out of vines, like his wings, or a large, tough-looking blade.
Review:
If there is a book that makes  a good argument for not having more Batman titles, it’s Swamp Thing. It’s kinda ironic, considering that the series is written by Batman writer Scott Snyder, but it goes to show that a great comic is more about who’s writing it than which character’s name is in the title.
So in this title, Alec Holland has been Swamp Thing before and well and truly believes that he’s finished. Not so, a life-force known as The Rot is resurfacing with a young boy as its avatar. The Rot is the force of death and decay, and it’s starting to build its own kingdom on earth. In response, the Parliament of Trees calls on Swamp Thing to defeat it. 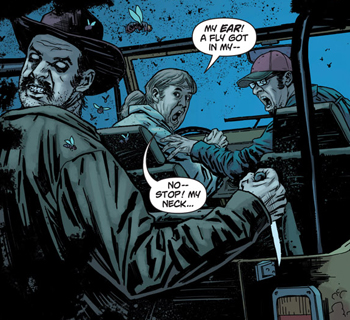 But Alec is done being Swamp Thing. He has too many haunting, disjointed memories of the experience and never wants to take on the mantle again. There’s a great message about personal sacrifice here. We want to sympathise with Alec- being Swamp Thing is a living hell and nobody would actually want to be him. At the same time though, there is a zero per cent chance that the human race will survive if Alec doesn’t take on the Swamp Thing mantle, so we also end up seeing him as somewhat selfish for his reluctance. It makes for a deep, multi-layered character that none of the Justice League has really managed to pull off just yet.
Equally interesting is Alec’s love interest Abigail Arcane, a woman with a deep connection to The Rot. Snyder somehow manages to balance Abigail’s part as both a love interest to be rescued and as a strong female character who is more than capable of handling things herself. It’s fascinating to see this line walked so well and by the end, you are cheering for both Abigail and Swamp Thing equally.
There’s some brilliantly dark dialogue in Raise Them Bones. Snyder gets the horror comic genre perfectly, allowing the dialogue to be highly entertaining without it being funny in the least. There’s a weird belief around comics at the moment that in order to be entertaining, a book has to have humour. DC’s been regularly attacked for not having enough humour in their books. While there are some titles about which I could say that’s a fair comment; Swamp Thing isn’t one of them. It’s appeal comes from visiting that dark side and being completely removed from your comfort zone while going somewhere rather disturbing.
And at the end of the day, it’s the art that really drives that disturbance home. Undead humans with twisted necks, zombie pigs with soulless eyes and other twisted creatures made of rotting flesh abound in this collection and they look as unnerving as they sound- possibly more. Okay, sure, some of the creatures of both The Green and The Rot look like rejected pokemon, but  they’re scary rejected pokemon. The book also benefits from the total lack of gutters in the page design. Panels are separated at odd angles with blood-splatter and vine shapes and give the book a chaotic feel that suits a horror story like little else can.

My one gripe with Raise Them Bones is that for a book in a series entitled Swamp Thing, you see a lot more of Alec Holland. Swamp thing only appears at the end of the book which is a problem when that’s the title of the book. If the book was called Scary Rejected Pokemon, I’d probably be okay with it, but I imagine you buy a comic called Swamp Thing, you want to see Swamp Thing.
But all the same, Raise Them Bones is an excellent look at the horror genre and it gets a four out of five scary rejected pokemon.
****
+ Well-developed characters
+ Dialogue that is great despite a lack of humour
+ Art is gorgeously creepy
- Swamp Thing doesn’t actually show up that much
Alternate Option: Batman: The Court of Owls
Another great one by Snyder, and if you’re worried about a book about a swamp monster being good, you can at least check out Snyder’s talent here.
Posted by T Vulture