If you want to know more about this character, it’s best you read the Batman Vol. 1 and Vol.2. It deals with a group known as the Court of Owls who rule Gotham City from the shadows. Talon is the name they give to their main assassins who they lift directly out of Haly’s circus. In Snyder’s Batman, the court was handily defeated, but not destroyed, and that’s where we take our mark.


It’s hard to get people on board with a new superhero. It’s the reason there have been so few genuinely new names in comics for the last fourteen years. Unless the name was seen in the nineties, you can pretty much kiss a new character goodbye. Such has happened to Talon; which is a pity, because the book is really an amazing read.

Scourge of The Owls introduces us to Calvin Rose- an escape artist adopted by the Court of Owls to be the next Talon. It’s a mantle that his better nature wins out over, however, and he flees the court; hiding for years until he hears that Batman has dusted the clocks of various Court members. Coming back to Gotham, Calvin meets Sebastian Clark. Clark is a former member of the Court and he has a job for Calvin; become the Talon again, and use his skills to take down what remains of the Court of Owls. This means hitting places that hold a large amount of the Court’s wealth, and taking on a few of the sixteen remaining Talons.


Now, if you haven’t read any of the New 52 Batman firstly... what got you interested in this character in the first place? Secondly, and more importantly, you should know that most of the Court’s Talons have developed healing factors. Calvin, unfortunately has missed out on this upgrade and therefore has to fight a little harder for his life as he sneaks into various court strongholds. This has the potential to result in a no-holds-barred gorefest, or even worse, Wolverine-style violence. Thankfully, Calvin doesn’t fight like that. For him, fighter harder means fighting smarter; Calvin uses diversion tactics, his environment and basic physics to outwit his opponents and it makes for battles that are actually more satisfying than anything seen in Batman.


Equally admirable is the fact that Calvin is a good person at heart. Instead of trying to kill opponents, Calvin tries to negotiate with the remaining Talons; more interested in turning them to his side than killing them. It would have been so easy for Calvin to become a tough, grizzled soldier, but amazingly Snyder and Tynion move away from that and give Calvin a real human side; one that doesn’t want to take a life- something that actually formed the basis of his escape from the Court. The comic book industry has enough Wolverines, and it’s refreshing to see a nice guy who’s also really good at dishing out pain.


The only problem I have with Scourge of The Owls is where Calvin has his obligatory meet-up with Batman. Batman had a huge part to play in the fall of the Court, but I think more could have been done by having Nightwing meet Calvin instead. Both of them have pasts that are directly connected to the Court and Haly’s Circus, and both have worked hard to reject the heritage that they were “supposed” to embrace. I really think a great team-up book could have happened here (were both titles not cancelled or getting cancelled), and it feels like a missed opportunity. 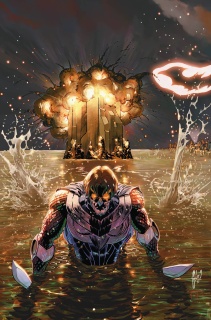 The art by Guillem March is fantastic, using a lot of browns and greys. It looks different to any of the bat-books out there now. In most bat-books, grittiness is achieved through use of shadow and dark tones. It’s effective, but March’s approach is significantly more clever. March creates darkness and grittiness by making everywhere Calvin goes look dirty and unsavoury. It’s a nice touch and real helps Talon feel like its own series. The pity though, is Calvin’s costume design. It looks great from the toes up, until you hit that mask, which looks more than a little silly. Considering that this book has a lot of dialogue, and therefore focuses a lot on Calvin’s head- that’s a problem.


Overall though, Scourge of The Owls is a brilliant read that fans of Snyder’s Batman should definitely pick up. It’s sad that this series ends with the next volume, but don’t let that stop you from reading one of the best original characters to come out in a long time. It gets a four out of five nice guys.


+ A nice character who’s awesome because of it


+ Art is distinctive from all other Bat-books


A story about the Court of Owls and Haly’s Circus- if Scourge of The Owls sounds good to you, this one should, too.
Posted by T Vulture