“Clint Barton, a.k.a Hawkeye, became the greatest sharpshooter known to man. He then joined the Avengers. This is what he does when he’s not being an Avenger.”


That’s actual text from the series, and that’s basically all the backstory you need for this character. In the last volume, Clint got in serious trouble with a gang known over the internet as the Tracksuit Draculas. They’re a small, Eastern European gang who use the word “bro” like you and I use commas. While Clint was annoying them, he also met a girl whose name was never mentioned and who also was on the bad side of the “bro”-sayers.


Hawkeye’s first volume, My Life as a Weapon, was one of the most enjoyable comics I’ve ever read. It’s light-hearted, episodic storytelling didn’t take itself too seriously and the whole thing was jam packed with humour and likable characterisation. What made it a real winner, though, was the art style; minimalist colouring and dirty lines gave it a retro feel and it really looked like nothing else on the market. While visually, Little Hits carries on the previous book’s tradition, it loses a lot in terms of story, and with that loss, goes a lot of the series’ charm.

Little Hits starts off with that same very episodic format in issue 7. We get a look at hurricane sandy through the eyes of Clint and Kate (the other Hawkeye). It’s a thoroughly entertaining issue that serves up the exact same feeling that we got from the first volume in the series, and that is something you end up thankful for.


Unfortunately, that feeling doesn’t really last, as the following six issues start to do something that really detracts from the great feeling of the series. Fraction decides that it’s time to give Hawkeye a proper story arc. Part of the awesomeness of the last volume was that reading each issue felt like watching an episode of a brilliant TV series and in losing that feeling, Little Hits becomes more like an average superhero book and less like the fun snippet into Hawkeyes life outside of superheroing.


That’s not to say the stories are bad though, there are some fantastic moments written by Fraction. One of which includes Clint standing outside his apartment, bow drawn in defiance of the Tracksuit Draculas. Fraction is also more willing to experiment with different storytelling techniques- a highlight of which is the final issue, which is told through the perspective of Hawkeye’s Pizza Dog. Nonetheless, the fact that the whole thing is still one story arc means that these different storytelling styles make reading Little Hits a practice in wading through mud.


The biggest problem here, though, is that Clint becomes less likable by the end of this volume, most of this has to do with the fact that despite his previous romantic liaison with the girl connected to the Tracksuit Draculas, Clint is still dating Spider-Woman Jessica. Call me old-fashioned, but it’s hard for me to barrack for a hero who I know is a cheater. I’m hoping this event causes him to make some life-decisions and ultimately become better, but I came out of Little Hits liking Clint less.


It sounds like I think Little Hits is a bad book, but I don’t. The art here continues to be amazing, and Fraction and Aja in particular have this perfect synergy when it comes to visual storytelling. Again, this comes to a climax in the final issue. Very little text is used here. Instead, the dogs thoughts are told through pictures in a sort of “mind-map” style. It’s brilliant to see a book where writer and artist really understand each other’s strengths and Little Hits doesn’t disappoint in that regard. 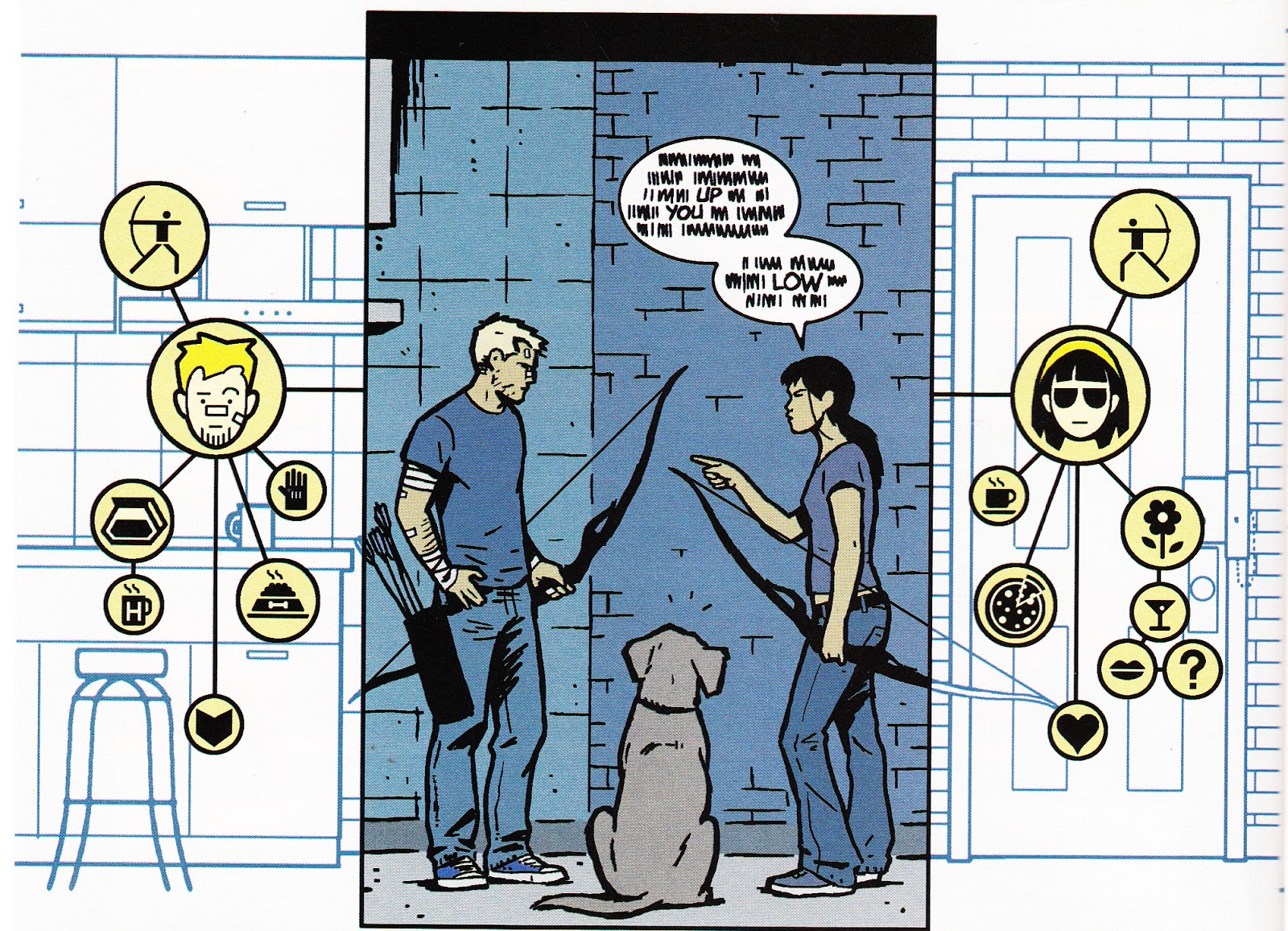 Another really great thing about this book is that it lets Kate stand out even more as great character. I ended up liking her more than Clint, which is big considering that Clint is really the title character here. She is shown to be more and more competent and her role as a moral compass for Clint is spot-on. The book also introduces Clint’s first real villain. Sure, there were the Draculas and Madam Masque in the first volume, but Little Hits’ The Clown looks like he could be causing some real trouble for Clint in the next volume- something Fraction really needs if he is going to start using long story arcs. And before you ask- no, the Clown is not just a repurposed Joker- I’ll leave it at that.


Little Hits is passable, but honestly represents a step backwards for Hawkeye. It gets a three and a half out of five “bros”.


+ Art continues to be fantastic


Alternate Option: Hawkeye: My Life as a Weapon


It’s the winner out of the two Hawkeye volumes out now- you don’t want to pass up on this one!
Posted by T Vulture